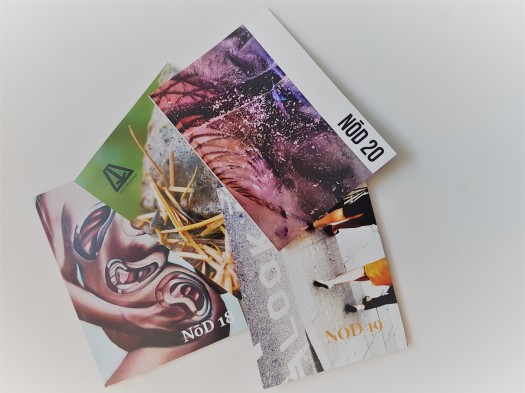 Kat Heger is a student and researcher at the University of Calgary studying Biochemistry and English degrees. She is a constant poet, awkward romantic, and amateur sticker collector. She has been published in anti-lang, Lida Literary Magazine, and iō Literary Journal. Besides acting as Editor-in-Chief at NōD Literary Magazine, she is otherwise kept busy by combating domestic abuse with the Students Against Domestic Abuse Association (SADAA) and by trying to pet all the dogs she meets.

Ethan Vilu is a student, writer and editor from Calgary, Canada. Currently in their four thousandth year of their undergrad degree, their interests include speculative writing, alternate realities and spending time in the mountains and the foothills.  Their poetry longsheet A Decision Re: Zurich was published by The Blasted Tree in March 2020, and their play Godspeed Fair Helena was produced by Rocket Science Collective in Fall 2019. In addition to their work with NōD, they are also the circulation manager for filling Station magazine.

Anna Navarro is a writer, musician, and English student based in Calgary, Alberta. When she’s not in classes, she can be found playing local music venues, dabbling in the world of poetry, and petting other people’s dogs. Her work has been published in Plenitude, the /temz/ review, and Existere among other literary journals.

Chrissy Doornenbal is a Calgary writer and reluctant UCalgary graduate who is weathering the present global crisis in a three-hundred-year-old farmhouse in rural Ireland. She is a cheesemonger by trade and intends to return to her studies in the fall, wherever that may take her.

Keegan Colwell is a second year English Major from Drayton Valley, Alberta. He is currently in the process of being from Calgary. He has an eclectic array of obsessions that he cultivates just enough to waste all of his time, but not quite enough to yield anything worth noting in this bio. Keegan’s favourite animals are moose.

Elias is an aspiring writer, lover of birds, musician, DnD enthusiast, and student of philosophy at the University of Calgary. Xe has obtained a HBSc in CMMB with a Minor in Music from the University of Calgary in 2018 and has worked in two research projects pertaining to genetic engineering and vaccine production. Xyr passions include medical ethics, epistemology, queer activism, and disability activism. When xe is not furiously working on xyr thesis, you can find xem hiking in the rockies.

Sara McClernon is currently studying English at the University of Calgary and plans on doing the After Degree Program for Education. She dabbles in creative writing, is fluent in French and is an avid bookworm. If she’s not reading or writing you can find her attempting to bake the latest recipe she saw on the food network.

Ian Wen is from Terrace British Columbia and currently resides in Calgary as a fifth year History major at the University of Calgary, who is planning on pursuing an After Degree in Education. He is also a major film and music nerd and is good at trivia. Ian is also a U of C Model United Nations Team and British Columbia Youth Parliament Alumni.